No, they are not professional blackjack cheaters. These twins, Dave & Dan Buck, are magicians who have been spending all their lives since their childhood by learning card magic. Their card tricks can actually be great helpers for those ones who want to become real professional cheaters. As we know, many ways of blackjack cheating can be done with only good hands coordination. You have to agree that such “magic” can help you a lot to develop your sleight of hands. 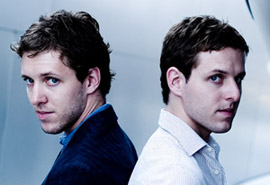 Dave & Dan Buck had become interested in magic when they were 11. After watching David Copperfield’s show, boys already knew what they wanted to do for the rest of their lives. They had begun learning different card tricks and entered the International Brotherhood of Magicians in 1998.

Card tricks were their lives. Dave and Dan met many famous magicians but the boys also had something to show and knew how to attract the attention by their sleight of hands. The brothers began making money out of their tricks. They sold their first lecture notes at first; then the twins began selling videos which explained some tricks. Today Dave and Dan Bucks have the web-site where they sell DVDs, books, cards and different accessories for learning card tricks.

In 2001 the first professional performance of Dave and Dan Buck took place in Las Vegas. 2002 has brought them another big performance in London, the UK. Today, the brothers prefer filmmaking to card magic though they do not give up their art and continue their study.

The Bucks also took part at Time Warp series on Discovery Channel. They showed there some cards techniques which could help blackjack cheaters to do their “job”: to beat money out of casinos illegally. Dave and Dan’s performance was called “The Fine Art of Cheating” and was suitable for both poker and blackjack.

So, it is up to you to decide whether it is cheating or simple card magic which goal is to entertain spectators.